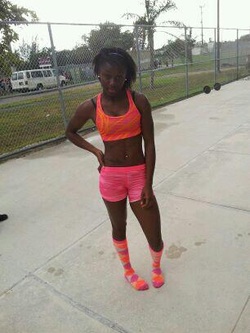 AAU Club Championships Mimi finished 10th in the 100 hurdles. Mimi ran a personal best in the 400h prelims and then came back in the finals and finished 4th with another personal best of 1:02.

February 27, 2014 @ Hallandale against Boyd Anderson, Plantation and Pines Charter Mimi Finished 1st in disc with a throw of 107'3".

Louie Bing February 21, 2014 Mimi broke the school record with another personal best of 114'5" and finished 6th. She also will be running in the finals for the 100 and 300 hurdles on Saturday and will run in the 4x400 relay.

Hallandale, Flanagan and Everglades meet on February 19, 2014. Mimi threw her personal best and broke the school record throwing a 109'2" and finishing 1st.

Lamisha threw 96' in discus at the Miramar Optimist meet today. She was unable to run in any events the meet was cancelled.

Back to Orange Bowl FLYTAF